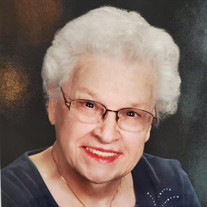 Jean H. Bornstein of Novi, Michigan, died peacefully December 22, after a long and fulfilling life. She was 90 years old. Jean was a lifelong Michigan resident, born in Caledonia and growing up on her family's farm in Alto. After graduating from high school in Caledonia as co-valedictorian, she attended what was then Michigan State College (the first in her family to do so), where she met her husband of almost 69 years, Sam. She returned to Michigan State University several years later and completed her BA in Elementary Education with honors. Jean and Sam were raised in the Catholic and Jewish faiths, respectively, and stood together to overcome initial objections to their marriage. She was an active member of North Congregational Church in Farmington Hills for many years. Jean taught kindergarten, fourth and fifth grades in Bay City public schools for 21 years. A country girl at heart, she always had a nature table in her classroom, on which bird's nests, shells, interesting rocks and other items were gathered. She said that children needed twelve hugs a day to thrive, and she provided many to her students, especially the youngest ones. Jean was an avid bridge player and gourmet cook who enjoyed entertaining. She left a full shelf of journals of her life and times, the funny and the sad, her joys and frustrations, who came for dinner and how she set the table. She could often be found with a pencil in her hand doing sudoku and crossword puzzles. Among the many things Jean treasured were doves and bluejays, hearts and colored glass, oak leaves and dogwood blossoms, walking and birdwatching, Michigan's four seasons and Christmas, Cape Cod-style houses, yellow kitchens and red front doors. Jean and Sam traveled extensively, adventuring all over the US and Canada, Costa Rica, Ireland, Scandinavia and China. In retirement, Jean and Sam lived at the Fox Run Senior Living Community in Novi. Jean is survived by her daughters Amy B. (Julia Sherwood) Diebaren and Sherry B. (Bruce) Innes, son-in-law William T. (Kathy) Kern, granddaughter Emily S. (James "Jacob") Smith, great-granddaughters Ava and Mia, her brother Russell (Mary) Harig, sister-in-law Gail (the late Louis) Harig, and several cousins, nieces and nephews and their families. Preceding Jean in death were her husband Samuel ("Sam") Bornstein, her parents, Maynard and Edna (Pitsch) Harig, and her brother, Louis (Gail) Harig. The family wishes to thank the staff of Rose Court and Angela Hospice for their unfailing kindness and care. No memorial services are planned at this time. Donations in Jean's memory may be made to the Fox Run Resident Care Fund.

Jean H. Bornstein of Novi, Michigan, died peacefully December 22, after a long and fulfilling life. She was 90 years old. Jean was a lifelong Michigan resident, born in Caledonia and growing up on her family's farm in Alto. After graduating... View Obituary & Service Information

The family of Jean H. Bornstein created this Life Tributes page to make it easy to share your memories.

Send flowers to the Bornstein family.