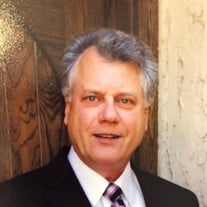 On Saturday March 27th, 2021, James E. Sabo, loving father, grandfather, sibling, and friend passed away. James (Jim) was born on April 17, 1947 in Detroit Michigan to Mary and Joseph Sabo. He has two brothers, Dan and Joe, and two sisters, Marie and Betty. Jim received his Bachelors of Arts in Business from Eastern Michigan University which led him to a long and successful career in business sales as an automotive supplier. Jim had many hobbies in his lifetime including his love for basketball (especially March Madness), traveling, and outdoor activities such as fishing, hunting - even in his own backyard. He went on numerous fly-in fishing trips to Canada and he also enjoyed adventures to Alaska while taking in salmon fishing and seeing the occasional bear or moose. Jim was a proud Vietnam Veteran, although Jim’s greatest pride was his two daughters and seven grandchildren. Jim loved watching his daughters play softball in high school, taking them up north to the cabin and he would do anything for his daughters. Jim often joked about raising the perfect wives for his son-in-law's Jason (Mandy) Ohrt and Chris (Marci) Pomey; his daughters were everything to him and he was very proud of the women they became. Jim was preceded in death by his father Joseph and his mother Mary. He is survived by his beloved daughters and son-in-law's Mandy Ohrt (Jason) and Marci Pomey (Chris), as well as his brothers Dan Sabo and Joe Sabo and sisters Marie Lowrey and Betty Hughes, many nieces and nephews and his grandchildren; Tessa, Victoria, Mya, Alaina, Kyla, Cal, and Selena. They learned so many important life lessons from their grandpa and he loved them very much. Visitation will be held at the O'Brien/Sullivan Funeral Home, 41555 Grand River Avenue, Novi, 248-348-1800 on Tuesday, March 30, 2021 from 2:00 PM - 6:00 PM. Memorial donations may be made to the Wounded Warrior Project[www.woundedwarriorproject.org]

The family of James Edward Sabo created this Life Tributes page to make it easy to share your memories.

Send flowers to the Sabo family.