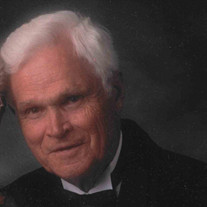 JAMES JOHN MESSINK June 5 1926 - September 6 2019 We have all had people who affected us significantly. The most influential person in our life has been our father. As his children, almost every personal trait or habit that is good or positive in ourselves, we can trace back to him. Dad was born in Dubuque, Iowa the youngest of three children. He enlisted in the US Navy and served his country during World War II. After the war, he attended Michigan Technological University and studied civil engineering. Dad started his career as a civil engineer and progressed to be the field superintendent on large construction projects. He supervised the building of many notable landmarks in the Detroit area including the Renaissance Center, the People Mover elevated structure, Palace Arena, and the Penguin and Monkey houses at the Detroit Zoo. By the time he retired, he was VP of Operations for a large construction company. Dad taught us the value of hard work and providing for his family. In an industry of tough construction workers, foremen, union officials, truck drivers, and business owners, he taught us the value of diplomacy over confrontation or harsh words. When he saw situations that he was unhappy with, he didn’t complain, but got involved to create solutions. He jumped into our school’s Dads Club, Scout troop, church, and other organizations to make sure they served his family well. He was always involved, but never drew attention to himself. He’d rather be doing something positive, but preferred to do it quietly, without fanfare. He avoided the public spotlight, but always acknowledged those who helped him in life. He wasn’t an emotional guy, but he always told us kids that he loved us. And he set an example of romantic love by always treating Mom with love and respect, and by the many small and big ways he publicly showed his affection for her. We learned so many life skills from him... respect for others, money management, devotion to your spouse, how to bait a hook and grow tomatoes, looking after friends in time of need, carpentry, and the immense value of a kind word - plus many others that are so ingrained that we don’t even realize them. Jim Messink breathed his last on September 6 2019, at the age of 93. We miss him already. Jim and his late wife, Joyce, raised 5 children: Joanne Talarek, Paul (Robert Toburen) Messink, Tom (Maureen) Messink, Barbara Macdonald, David (Leona) Messink, 11 grandchildren, and 7 great-grandchildren. The services for Mr. Messink will be private. Donations in memory of James can be made to the Salvation Army www.salvationarmyusa.org

JAMES JOHN MESSINK June 5 1926 - September 6 2019 We have all had people who affected us significantly. The most influential person in our life has been our father. As his children, almost every personal trait or habit that is good or positive... View Obituary & Service Information

The family of James John Messink created this Life Tributes page to make it easy to share your memories.

Send flowers to the Messink family.