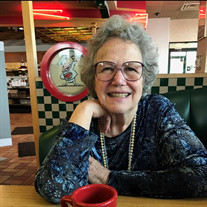 Inamae (Ina) Deneau Inamae Patricia Deneau, 84, of Detroit, MI, died on Saturday, April 25, 2020. Daughter of Bob and Elsie Collins (predeceased) and loving partner of Thomas Martin (also predeceased) Ina passed away at the hospital after a brief illness. She is survived by two children, Christopher Deneau (Brenda) and Shelley Dowland (Gary); two grandchildren, Patrick Deneau (Crista) and Elizabeth Osantoski (Nick); three grandchildren, Isla Deneau and Aubrey and Shelby Mae Osantoski; brother, Tom Collins and numerous nieces and nephews. Ina graduated from MacKenzie High School. Later in life, she continued her education in a new Cultural Studies program at Wayne State University. The program shined the spotlight on continuing discrimination against blacks, gays and women at Detroit area establishments. Ever the trailblazer, she went with her classmates to challenge stereotypes and championed the cause for equality. The dictionary definition for life may not say “Ina” but it should. The beloved mother, grandmother, great grandmother, life partner, sister, aunt and friend lived her life to the fullest and inspired all those lucky enough to know her to do the same. She and her partner of 50 years, Tom, were frequent world travelers – France, Poland and Mexico among their favorites. In the USA, they traveled to about every state in their VW Vanagon - visiting museums, president homes and parks. Ina was happiest when she was on the road and when she was with family and friends. She was a gourmet cook and her dinner parties were legendary – not just for the food but the ambiance, conversation and her big warm personality that encompassed everyone around the table. Ina always had super energy that drove many fun times for her family. In the 1960’s she used to drive with her husband, Al, 24 hours straight to the Rocky Mountains so the family could ski for a week at various Colorado ski resorts. Ever good at making the money stretch, they slept overnight in a camper in the parking lots. One year, on the way, Ina spotted another vehicle with Michigan plates. At the next rest stop, she had Al ask the woman and her two sons over to the camper for some fresh coffee and to say hi. Joan became a lifelong friend, which was typical for Ina, and years later proved to be very convenient. Joan moved to Aspen and the family could stay at her condo instead of a parking lot. She encourage that love of traveling by van to her grandchildren who went on many journeys with her – to say it gave them an education, is a loving understatement. Ina will be celebrated late summer with a memorial party (dancing and champagne toasts with strawberries will be de rigueur). Donations in her honor can be made to the Detroit Institute of Arts.

The family of Inamae Deneau created this Life Tributes page to make it easy to share your memories.

Send flowers to the Deneau family.