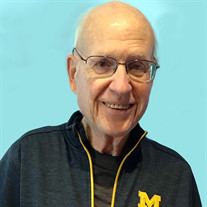 Howell Hopson Ridley Jr., “Buster,” age 79, born August 14, 1940 lost a hard fought battle to heart disease, diabetes, and renal disease on November 29, 2019. Buster is survived by his wife of 55 years, Kathleen (Zobro) Ridley, and three children: son Craig Ridley (Rachel) of Wixom, Michigan, daughter Amber Biser (Steve) of New Paris, Ohio, and daughter Tracey Maranto (Lou) of Estero, Florida as well as six grandchildren: Ava & Nicholas Ridley, James Biser, and Elizabeth, Emily and Eleanor Maranto. Buster is preceded in death by his late sister Joan C. Ridley of Los Angeles and is survived by his sister, Sister Susan Ridley, O.P. of Grand Rapids. Following his graduation from Grand Rapids Catholic Central High School in 1958, Buster enlisted in the U.S. Army for six months and thereafter served in the U.S. Army Reserves. He graduated from the University of Michigan – Dearborn Cum Laude in 1964 with a Bachelor’s degree in Accounting. His first position was at Ernst & Ernst in Detroit as a staff accountant where he earned his CPA from the state of Michigan. He then went on to become Controller for Crowley’s department store in Detroit and then served as Controller for William Schenck Enterprises in Farmington Hills. A few years later, he became the CFO and head of Human Resources at Lectron Products in Rochester Hills where he served for 24 years. He then retired in 1995 to head up his own company, Security Financial Advisors until October, 2019. Buster enjoyed spending his winters in Naples, Florida for the past 20 years with his wife Kay, where they made many dear friends. He loved golfing and playing cards with his buddies, and was a very kind, generous and selfless person who made everyone feel welcome and loved. He had a way of lifting people up in the bad times, making them laugh in the good times, and always made himself available to help the many people he cared about. He was very successful professionally, and deeply respected by his business associates and clients. Grandpa Buster was so dear and loving to his grandkids, and they had so many fun, wonderful times together. An amazing father and husband, he gave us all unconditional love and support, with many laughs along the way. He will be dearly missed by all. A memorial service will be at O’Brien Sullivan Funeral Home – 41555 Grand River Ave, Novi, MI 48375 on Monday, December 16th. The family will receive friends from 11am to Noon, with the service to follow at Noon, with a luncheon to follow. In lieu of flowers, the family has asked that donations be made in Buster’s name to The Salvation Army www.salvationarmyusa.org The family would like to thank everyone for their friendship, compassion and concern.

The family of Howell "Buster" Hopson Ridley Jr. created this Life Tributes page to make it easy to share your memories.

Send flowers to the Ridley family.