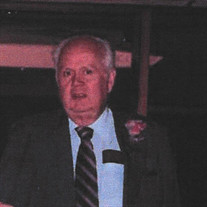 Herbert Neal March 21, 1935 – January 17, 2021 Beloved husband of Phyllis Neal. Loving father of Greg (Patty) Neal and Joyce (Rev. Michael) Zerkich. Dear grandfather of Michelle Zerkich, Madeline Weirick (Nate), Molly Kline, Jeff Neal (Becky) and Sherri Neal. Cherished great grandfather of Tyler Kline, Sophia Kline and Lennon Neal. Herb was a solid Christian man of which several say served as a mentor for how to live the Christian life and be a loving husband and father. In the 1960's, Herb and Phyllis led a Youth Group at Maranatha Baptist Church and Herb was a Trustee. He led a bible study at Fellowship Chapel Church. Herb was an avid reader of his bible, the Wall Street Journal, local news papers and many other books. Herb was a life long Detroit Lions fan regardless of their lack of wins and always kept a sense of humor about their seasons. Among the stories the family share about him are: -Affectionately referred to not only as dad, grandpa, and great grandpa, but also “Pops” by his only grandson, and by his biological and non-biological nieces and nephews as “Uncle Herbie” -Herb met his wife Phyllis at Maranatha Baptist Church in the youth group in which Phyllis was 14 years old. Her parents would not let them date until Phyllis was 16. They married in 1958 and Herb was invited within a week by Uncle Sam to the Army in Fort Gordon, GA for his 2-year tour of duty as a medic. -His daughter Joyce remembers when growing up, her dad would ask her to do things she did not want to which he would reply, “I only make you do this because I love you”. Adult Joyce used this same line on her father stating, “Dad, I only make you go to the doctor because I love you.” -His son Greg fondly remembers assembling with Herb a train table complete with buildings, electrical lights, and track which took up a lot of room in the basement. -When Greg got engaged to Patty, Herb would jokingly tell Patty that when they got married, she got Greg and his smelly gym shoes too for life! -Michael, his son-in-law, remembers when Herb found out Michael would cook multiple dinners for his daughters so each had a meal they liked after their daily swim practices, Herb’s advice was to only cook one healthy dinner each night. At the time Michael likened Herb’s advice to the same advice given to Moses from his father-in-law Jethro: Don’t work so hard! -After granddaughters Madeline and Molly turned 6 months old, Herb said, “If I had known how much fun grandkids were, I would have skipped having Greg and Joyce and just had the grandkids.” - Herb would tell Jeff that Jeff was his favorite grandson and Jeff was quick to remind him “Grandpa, I am your ONLY grandson”, which always made them laugh. -Sherri didn’t get teased by grandpa too much because she was the baby and the baby could do what ever she wanted. -When Greg and Patty brought grandchildren Molly, Jeff, and Sherri to visit their grandparents one time, 6-year old Jeff found a quarter between the couch cushions which grandpa told Jeff 'it must have fallen out of my pocket and into the couch' and let Jeff keep it. Jeff was so excited! After that, each time the three visited, magically many other coins were left in the couch. So, each time when the three kids visited, they'd run from the car, through the front door, and to the couch to see if there were any coins in the couch they could keep (there were always coins in there were somehow...) -Joyce and Greg found that Herb secretly taught his grandkids how to peal back the paper on a plastic straw and position the straw in your lips just right so you can blow the paper across the table at someone. (Joyce and Greg were never allowed to do that when they were kids...ha) -Everyone in the family and close friends remember Herb telling kids, "You can tickle me any day, but I'll only laugh on Sundays" And somehow he did it... -To this day, granddaughter Madeline wonders how could she visit grandpa to play a 4-day long game of Monopoly with she always winning (yet her dad Michael could play her in 2 hours and he always won...) -Granddaughter Michelle would find the best time to talk to grandpa Herb was after the first quarter of a Detroit Lions game since the Lions never seemed to play as well as grandpa thought they should. One time, Herb listened to Michelle talk non-stop and show Herb for 45 minutes how she set up her computer zoo, all about each animal, its food, etc. Michelle talked the entire time and Herb only listened (grandpa always had time to listen to grandkids) -The Teets and Frantz family nieces and nephews said that a high school graduation day party end of day ritual always included Uncle Herbie holding to his head the stack of high school graduation gift envelopes from that day in which Uncle Herbie could guess within 20 dollars the total of all monies in the entire stack. Private family services were held. In lieu of flowers please make donations to Herb’s favorite charity Youth for Christ, 23136 Hughes Avenue, Hazel Park, MI 48030 or online by clicking here

The family of Herbert Neal created this Life Tributes page to make it easy to share your memories.

Send flowers to the Neal family.