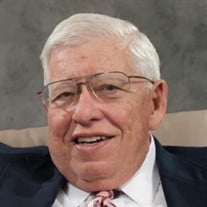 Henry O. Holtschneider, born Jan. 7, 1937 in Pittsburgh, Pennsylvania, died March 9, 2020 in Novi, Michigan at the age of 83. Along with his brothers Charles and James Holtschneider, Henry was raised by parents John and Susan Holtschneider to value family, religion and great music. Known for his warm wit and mischievous nature, Henry was recognized as a loving husband and father, a reliable friend, a giving volunteer and a great boss. After earning a bachelors degree in chemical engineering from Penn State University, Henry moved to southeast Michigan to begin his career and receive an MBA from the University of Detroit, eventually joining Ford Motor Company where he would spend 30 years serving as a chemical engineer, retiring in 1997. More importantly, the move to Detroit allowed Henry to meet Mary E. Martin, the woman who would become his wife in 1961. Henry and Mary went on to have eight children and seven grandchildren. Henry is survived by his wife Mary, his children Rev. Dennis Holtschneider, Joe (Elaine) Holtschneider, Donna Holtschneider, Peggy Holtschneider, Karen (Howard) Hampton, John (Kathleen) Holtschneider, Casey Holtschneider, and his grandchildrenEric Zwierzchowski, Scott Zwierzchowski, Cassidy Hampton, Stephanie Hampton, Sheila Holtschneider, Eric Holtschneider and Jay Holtschneider. He was predeceased by his daughter Janet Holtschneider. Henry was an active member of his church throughout his life, including being a founding member of St. James Catholic Church in Novi, Michigan where he served as an usher and member of the vocation committee. His love of music was well known. He played piano, bass and accordion, but got the most joy from live jazz music, whether performed by a member of his family or by one of the talented professional musicians at the annual Detroit Jazz Festival. Visitation will be Thursday March 12, 2020 at St James Catholic Church 46325 W. Ten Mile Thursday 10:00am until the funeral Liturgy at 10:30 a.m. Interment will follow at Holy Sepulchre Cemetery (25800 W. 10 Mile Road, Southfield, MI). Memorial contributions may be made to the LYTE Collective, an organization founded by Henry’s daughter Casey Holtschneider to provide resources to Chicago youth dealing with poverty and homelessness. Donation information can be found at www.lytecollective.org/donate/ Donations also can be made in Henry’s name to Catholic TV, a network that provided much comfort to Henry in his latter years. Donation information can be found at www.catholictv.org/donate.

Henry O. Holtschneider, born Jan. 7, 1937 in Pittsburgh, Pennsylvania, died March 9, 2020 in Novi, Michigan at the age of 83. Along with his brothers Charles and James Holtschneider, Henry was raised by parents John and Susan Holtschneider... View Obituary & Service Information

The family of Henry Otto Holtschneider created this Life Tributes page to make it easy to share your memories.

Send flowers to the Holtschneider family.