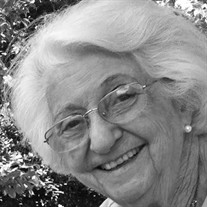 Helen Partogian Casey NOVI - Helen Partogian Casey, age 98, passed away on April 15, 2021. She is preceded in death by her husband of 43 years, Allan ‘Mark’ Casey, Jr. and sister Margaret Carlini. Survivors include her two stepsons, Allan Casey, III (Shirley) and John Casey (Terry) and John's two children, Scott Casey (Lindsay) and Amy Casey and Scott's two children, Boswell and Margaret. Born in Armenia to Bagdasar Partogian and Agnes Aragian, Helen’s family immigrated to Detroit in the mid-1920’s. After growing up in Detroit, she worked many years for Cadillac Motor Company. After marriage, she and Mark moved to Kansas City, MO, where they lived for 38 years, before returning to Michigan. They enjoyed many close friendships, activities in the community, tennis and travel. Helen volunteered time supporting various charitable activities. She left with her tell-tale pink streak in her hair, well known to her many friends and mahjong buddies. After cremation, her remains will rest on a sunny mountaintop in Colorado. In lieu of flowers, memorials may be made to the Gleaners Community Food Bank, 2131 Beaufait, Detroit, MI 48207, or the charity of your choice

The family of Helen Rosee Casey created this Life Tributes page to make it easy to share your memories.

Send flowers to the Casey family.