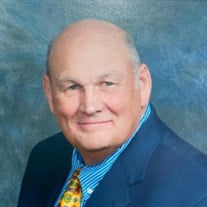 Gregory J. Knoph, Sr. May 9, 1947-April 10, 2020 Greg was born in Detroit, MI to Edwin and Genevieve Knoph (Papa and Nana Nop) and was the third of seven children: Judy Hunt, John (Barb), Joe (1949-2003), Jerry (Marcie), Mark (Jeanette), and Mary Kay (Ralph) Sirotkin. He attended Our Lady Gate of Heaven Grade School, Visitation High School, Highland Park College, and Ferris State. At Visitation, he met and fell for one of the teacher’s (who was also the Athletic Director) daughters, his love, Sharon (Hannigan). From his beautiful Irish bride he inherited a large loving family: his in-laws, Marjorie and Martin (Grandma Margie and Grandad Hannigan); and her six siblings, Maureen, Sheila, Martin (Rose), Margie (Chet) Kuras, Kevin (Patti), and Kathy. Together, they celebrated 50 years of marriage, had two children-Gregory, Jr. (Jenny) and Colleen (David) DeWitt, and countless blessings, many of which involved their 51 nieces/nephews, and 42 great nieces/nephews. Greg was an amazing all-around athlete who played basketball through college, baseball and football through high school, golf, and softball, winning the Softball World Championship in 1978. He continued to play/manage with his son on the Our Lady of Loretto mens’ softball team through this past summer. He never missed a grandchild’s sporting event; he was their greatest fan and kept meticulous stats year after year. Many refs will miss seeing Greg pacing the sidelines. Greg served in the National Guard. He served as a Grand Commander of Alhambra. He served on the board at the Michigan Columbus Credit Union. He served as treasurer for years of the Building Association for the Knights of Columbus. He worked for over 30 years at Michigan National Bank, many of those as V.P. Most importantly, by far, to Greg, he served the Lord. He attended mass daily and observed weekly Adoration. Although his home parish is St. Kenneth, Greg enjoyed travelling to different churches, saying he and Sharon were “ROAMIN’ Catholics.” Greg was a lifelong devout Catholic whose faith has been a beacon throughout his highest highs like the births of his greatest loves, his grandchildren: Molly (Eoghann) Stephens, Abigail, Aidan, Ian, Nicholas, Sean, and James and his lowest lows like the deaths of those who have preceded him and this horrible Corona virus that kept him from his family in his last days as he fought COVID hoping to take a souvy! Although he did not win this battle, the family is thankful for the nurses and doctors who stood beside him and comforted him. The current state of our world has forced a temporary delay in a memorial mass and a “Draft Day Party” that Greg Jr. has mentioned where we can celebrate the life of this amazing husband, father, grandfather, and friend who has been “called up to the bigs.” These will be planned in the near future when we can share some of the things Greg would appreciate so much--our faith, our family, our friends, and our fond memories--TOGETHER! Greg will be interred at Holy Sepulchre Cemetery on Wednesday, April 15, 2020.

The family of Gregory J. Knoph Sr. created this Life Tributes page to make it easy to share your memories.

Send flowers to the Knoph family.