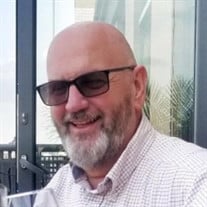 Jerry Pociask left this world for the next grand adventure on Monday, June 21st. Survived by his sister, Chris, three children; Jason (Lindsay), Jessie, and Catherine; and three grand children; Kylan, Keedan, and Aila. A devout educator to veterans and people with disabilities, he also wrote and published four books and multiple screen plays. He spent a large portion of his time volunteering with the Boys and Girls Club of America and various organizations to the benefit of children. Jerry loved his family, friends, travel, and telling stories. He was so proud of his family and their accomplishments and was always a listening ear. He will be remembered for his sage advice, kind heart, and larger than life hugs. For many, the world is a little darker place with his absence, but his light will shine a path for those that knew him. Visitation at the O'Brien/Sullivan Funeral Home, 41555 Grand River Avenue, Novi, 248-348-1800 on Thursday, June 24, 2021 from 9:00 AM until time of the funeral service at 11:00 AM. More information to come. In lieu of flowers please donate in Jerry's honor to Mimi's Mission by clicking here Wealth of Purpose I said goodbye to an old friend this week, Jerry Pociask. At his funeral, the preacher encouraged us to hoist a glass of bourbon in Jerry’s honor, so I am following instructions and writing this in my best Ernest Hemingway possible. Jerry and I met in 1997 at Munson Medical Center, where we worked in the same building. He had an unmistakable swagger about him, a real magnetism. Jerry liked to describe himself as a “Polish Adonis.” His self-confidence was off the charts. He wore a leather biker’s jacket. He was a bad ass. As tends to be the case with confident people, Jerry was opinionated – some might say VERY opinionated. To Jerry, life was black and white, clear lines between right (Jerry’s way) and wrong (the other way). Everyone else needed to get a clue. Jerry’s certainty about life, coupled with a gift for storytelling, made him very persuasive. He was a true protagonist, a character. To some, he may have been frustrating. To me, he was simply fascinating. Jerry would regale me with stories of his early career in real estate in Livonia, making six figures, living the “good” life. His role at Munson felt beneath his greatness, beneath his potential. He seemed so experienced and worldly yet confined by the small-town limits of Traverse City. Jerry did things his way, and he didn’t care what others thought. He was at times unconventional, and he was not afraid to take risks. He refused to exist in a neat little box. Jerry would say it was his ADHD. What would he do next? Become a painter? An author? A life coach? Yes, yes, and yes. Whatever he was into, he was all in. Surely, someday, Jerry would harness his bravado and zest to achieve great wealth. It’s taken me 25 years and a funeral to realize this: Jerry did achieve great wealth. Maybe not in the traditional sense, but in a sense of purpose. Jerry spent the second half of his life giving back. I saw the seeds of this spirit planted as he went through Leadership Grand Traverse in the late 90’s. His project for the training program focused on the local Boys and Girls Club. From there, Jerry was hooked. He was full steam ahead for social causes, energized by helping his fellow man. It’s amazing when you see someone find their purpose in life – an intersection of passion and grit. Jerry was born to help people, to teach people – young people, old people, his family, veterans with PTSD, even those who didn’t know they needed help. It was his true calling. He was plugged in to a higher spirit, and he evolved into a sensei. I have so much respect for Jerry’s commitment to his purpose. He led a life well-lived. When I stood by Jerry’s casket on Thursday and saw him at peace, I was frozen for a moment. Who would fill this huge void left by his passing? He obviously had touched a lot of lives, as shown by the turnout at his funeral. If each of us who knew him covered a fraction of that void, we might get to 50 percent. I don’t know … it’s a tall order. Maybe I have a time-altered view of it all, but I hope not. I am so damn proud of Jerry. I wish I had one smidge of his chutzpah. I will miss him and all that he represented – a true wealth of purpose. ***If you’d like to help me carry on Jerry’s wealth of purpose, please consider giving to one of his favorite charities, Mimi’s Mission, http://mimismission.com.*** "May the road rise up to meet you. May the wind be always at your back. May the sun shine warm upon your face; the rains fall soft upon your fields and until we meet again, may God hold you in the palm of His hand." To Jerry! Written by Jeff Couzens

The family of Gerard "Jerry" Pociask created this Life Tributes page to make it easy to share your memories.

Jerry Pociask left this world for the next grand adventure on...

Send flowers to the Pociask family.