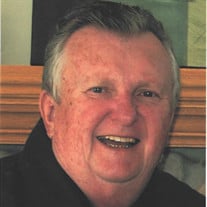 Gerald “Gerry” Patrick Haran, age 79, born in Brooklyn, NY, on August 23, 1939, passed away suddenly on November 9, 2018 in Novi, MI. Gerry grew up in the shadows of Ebbets Field, attending Bishop Loughlin Memorial High School and then St. Francis College, where he was a member of Phi Rho Pi Fraternity. It was at his fraternity’s semi-formal dance where he met his sweetheart, Maureen Fugelsang. Gerry and Maureen were united in Holy Matrimony on November 17, 1962. Beginning in 1965, they were blessed with five boys born in the span of seven years. Gerry was an engaged father, coaching his sons in basketball and baseball and being actively involved in their youth sports organizations. In his middle-aged years, he was community- and politically-minded, working to combat hunger in the region and actively opposing the production of nuclear weapons. Later he became involved in political campaigns and served several times as precinct delegate at the Michigan Democratic Party’s annual convention. Over the last 10 years, Gerry loved telling jokes, dancing and singing in productions by Novi’s Beyond Belief senior performers. Gerry was very proud of his sons and grandchildren, and he would bend the ear of anyone who would listen to details of their successes. He loved telling stories, particularly about his interactions with local and national political figures, sports stars and celebrities. The veracity of his accounts was sometimes in question, but no one doubted his enjoyment in telling the stories! Gerry was preceded in death by his parents, John Joseph Haran and Gertrude (Hanrahan) Haran, and his brother John “Jack” Haran. Gerry is survived by his wife of 56 years, Maureen (Fugelsang) Haran, his (5) sons: Douglas (Lisa), Patrick (Karen), Andrew (Holly), Matthew (Leah) and Edward (Karen). He has left many fond memories and stories with his (12) grandchildren: Taylor, Allyson, Thomas, Bailey, William, Hayden, Noah, Mark, Luke, Kevin, Paul and Sierra and numerous nieces and nephews. Gerry requests that donations be made in his memory to: Gleaners Community Food Bank, 1-866-GLEANER (453-2637) Click here to contribute. or Capuchin Soup Kitchen, 313-579-2100, ext 185 Click here to contribute. Visitation at O'Brien/Sullivan Funeral Home, 41555 Grand River Avenue, Novi, 248-348-1800, Tuesday, November 13, 2018 from 2:00 PM to 8:00 PM with a scripture service at 7:30 PM. Instate Wednesday, November 14, 2018 at Church of the Holy Family, 24505 Meadowbrook Road, Novi from 10:00 AM until time of funeral liturgy 10:30 AM. Memorial donations may be made to the Gleaners Community Food Bank -

The family of Gerald "Gerry" Haran created this Life Tributes page to make it easy to share your memories.

Send flowers to the Haran family.