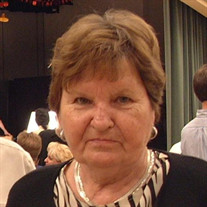 Georgina (Ena) Veronica Simpson Ferns Moore, age 85, died on July 28, after a long and courageous battle with Alzheimer’s. She was born December 31, 1934 in Glasgow, Scotland. In 1958, she married John Thomas Moore and became a devoted wife and mother. Ena and John immigrated to the United States through Canada in 1962. In Michigan, they raised their family in Livonia and later moved to Brighton. Ena was beloved mother of Brendan (Emily), Paul (Susan), Kevin and Anne Marie (Thomas) and the late, Stephen; also mother-in-law of Lesley and Dawn. Loving and sweet grandmother of Kelly, Sean, Heather, John Paul, Liam and the late Melanie, Matthew, Jessica, Derrin and Nichole; adoring great-grandmother of TJ, Robert, Jr., Leeanne and Liam. Ena is also survived by her sister Alice Ferns Harkins and brothers Frank Ferns and James(May) Ferns along with many, many nieces and nephews, and great nieces and nephews who reside in Scotland, Ireland and England. Ena was a beautiful, loving and thoughtful woman who enjoyed spending time with her family and friends. One of Ena's greatest joys was time spent living on the lake where she loved both boating and gardening. She was especially proud of her homeland, and liked to share its music, food and traditions with those she knew and loved. She will be forever in our hearts and deeply missed. Cremation arrangements entrusted to O’Brien/Sullivan Funeral Home. A Mass and Celebration of Life gathering is planned for a later date to be determined. In lieu of flowers, please consider making a memorial gift online in her honor to the Alzheimer’s Association click here to contribute, Michigan Chapter thru the Georgina Moore Tribute Page at https://tinyurl.com/yyn8q17q

Georgina (Ena) Veronica Simpson Ferns Moore, age 85, died on July 28, after a long and courageous battle with Alzheimer&#8217;s. She was born December 31, 1934 in Glasgow, Scotland. In 1958, she married John Thomas Moore and became a devoted... View Obituary & Service Information

The family of Georgina Veronica Moore created this Life Tributes page to make it easy to share your memories.

Send flowers to the Moore family.