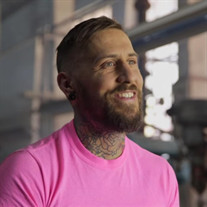 Geary Steven Morrill II passed away January 19, 2021 at the age of 43, from early onset colorectal cancer. Geary will forever be lovingly remembered by his wife Cyndi, daughters Zetta (10) and Wynne (8), parents Geary and Nancy (Buhs) Morrill, sister Erin (Kevin) Moore, his grandfather Richard Morrill, and hundreds of other relatives and friends. He was preceded in death by his grandparents Roberta (White) Morrill, Mary Ellen (Slater) Buhs, and Charles Buhs. Geary is described by friends as "cosmic," "a human sunrise," and "a human shooting star." He was a magnetic person who drew people to his luminous and loving presence. He lived with intention, striving to infuse fun and positivity into everything he did. This was evident in the prismatic, upbeat art that he created during his 22-year career in tattooing, in small everyday acts of kindness that he made routine, and in his devotion to his daughters. Geary was known for being outrageously funny, quick-witted, adventurous, wearing vivid clothes, and celebrating simple joys. He wanted to teach his daughters that life is fun and the world is magical. Geary spent most of his life in Michigan, leaving for a few years to work at influential tattoo studios in California and Virginia. He had resided in Ferndale, Michigan for the last 3 years, where he and his wife opened futurelazertiger, an artist's collective tattoo studio. Geary had previously co-founded Eclectic Art in Lansing, Michigan, with his best friend Mike Riina and Sean Peters. Through his studio's business models, charity work, and advocacy, Geary actively contributed to making the tattoo industry a safer and more inclusive place. In 2020, while battling cancer, he co-founded the nonprofit Tattooing Beyond, which educated body artists on how to safely return to work during a pandemic. He was well-loved by his clients, coworkers, and industry colleagues. He is remembered for being positive, kind, generous, and a great listener. Above all the good things he had done in his life, the role that was most important to Geary was being a dad. After the birth of his first daughter, he restructured his daily life to spend as much time with his family as possible. He was the dad who chaperoned every field trip, surprised the kids at school for lunch, and spent hours teaching them, listening to them, and helping them discover their own dreams. He preferred time with his kids over money, fame, or any other accolade. He lived the phrase, "if you want to change the world, go home and love your family." Geary had spent the better part of a decade dealing with health issues whose source could not be pinpointed. He was misdiagnosed several times until finally being diagnosed with Stage IV colorectal cancer in January 2020, at the age of 42. He was determined to face this adversity head-on, just as he had faced many other adversities in his life. He took it on with unwavering determination, even as a global pandemic made everything exponentially harder. Geary would wake up at 5 am to drive himself an hour to a long day of chemo infusions, then come home wearing a 48-hour chemo pump that he would disconnect himself. He endured brutal side effects that took away his ability to do any of the things that he loved. He continued to work until peripheral neuropathy took away his ability to tattoo. He never gave up his fight, seeking aggressive and experimental options. He was not afraid to do hard things. His wife and children now look to him as inspiration to do the hardest thing imaginable: living without him. In Geary's memory, we wish to bring awareness to the epidemic of Early Onset Colorectal Cancer. EOCRC is rising at an alarming rate, and there is currently no routine screening for it in people under 45. This is especially concerning because 7 in 10 patients are asymptomatic. Please visit www.ccalliance.org to learn more about the early onset epidemic. In lieu of flowers, the family has set up a dedicated campaign in honor of Geary. Donations to PALTOWN support COLONTOWN, a community for colorectal cancer patients and carepartners, and PALTOWN's programs to educate and empower patients. www.paltown.org/geary Memorials for Geary will take place at a later date when it is safe for loved ones to gather together, reminisce, and hug each other tight.

The family of Geary Steven Morrill II created this Life Tributes page to make it easy to share your memories.

Send flowers to the Morrill family.