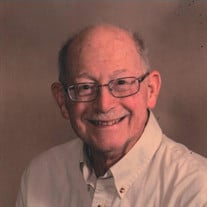 On Tuesday, December 15, 2020, Frederick J. Geist of Northville passed away at age 79 due to complications of Acute Myeloid Leukemia. Fred was born on April 18, 1941, the second child to Bob and Anne on Staten Island, NY. At a year old, the Geist family moved to Detroit, Michigan where he grew up, graduating from University of Detroit Jesuit High School in 1959 and after service in the Michigan National Guard, he subsequently graduated from Lawrence Technical Institute with a degree in Business Administration. He worked in administration at Detroit Diesel Corporation for 38 years. Fred married the love of his life, Jean, in 1980. Together, they had four children. Unfortunately, in 1994, Jean passed from colon cancer. With the help of his family, in-laws, and friends, he stayed strong to raise his children. Fred was a strong-willed and independent person. When he was diagnosed with Multiple Myeloma in 2012 after shattering his femur due to a softball sized tumor, he very frankly told his doctors that he would “walk it off.” This positive attitude served him well and he lived another eight years before his most recent diagnosis. Fred was a lover of animals, baseball, golf and music. He was especially devoted to his golden retriever, Porter. An avid Detroit sports fan, he was a dedicated follower of the Tigers, always enjoying a game at Comerica Park but often reminiscing about the golden days when the team played at Tigers’ Stadium on Trumbull. Fred loved golf. He would have played all year if the weather allowed and some of his favorite times were spent on the course with his best friends, only frustrated when at the putting green. He loved music, especially Johnny Cash and other classic country. Fred was a devout Catholic and member of the Knights of Columbus. He often told very detailed stories, and he will always be remembered for his tempered sense of humor and generous spirit. Fred was preceded in death by his parents, sister Roberta, wife Jean, and parents-in-law Frank and Rose. He is survived by his brother Bob and sister-in-law Pam; brother-in-law George; children Laura, Jennifer, Jamie, and Frank; sons-in-law Jason, James, and Joel; sister-in-law Andrea and brother-and-sister-in-law Jim and Susan; nephew Jim; and granddaughters Ally, Hayden, and Brynn, as well as numerous friends. He will be dearly missed by all who knew him. Visitation at the O'Brien/Sullivan Funeral Home, 41555 Grand River Avenue, Novi, 248-348-1800 Tuesday, December 22, 2020 from 2:00 PM - 7:00 PM. Instate Wednesday, December 23, 2020 at Holy Family Catholic Church, 24505 Meadowbrook Road, Novi from 10:00 AM until time of funeral liturgy 10:30 AM. Interment Holy Sepulchre Cemetery, Southfield. In lieu of flowers the family welcomes memorial contributions to the Knights of Columbus Council 11811 at Church of the Holy Family. Fred's Mass will be stream live on Wednesday, December 23, 2020 at 10:30 AM.

On Tuesday, December 15, 2020, Frederick J. Geist of Northville passed away at age 79 due to complications of Acute Myeloid Leukemia. Fred was born on April 18, 1941, the second child to Bob and Anne on Staten Island, NY. At a year old, the... View Obituary & Service Information

The family of Frederick Joseph Geist created this Life Tributes page to make it easy to share your memories.

Send flowers to the Geist family.