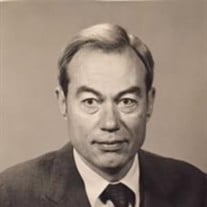 Frederic Leigh Wyckoff, April 2, 1927- August 25, 2020. Beloved husband to Violet (nee Droshine) for 69 years, loving father to Bruce (Gloria) Wyckoff, Gary (April) Wyckoff, Valerie (Jim) Nelson and Laura (Mark) Johnston, and proud grandfather to Garret, Matthew, Rachel and Claesen. Preceded in death by his parents Frederic Leigh and Olive Waite Wyckoff, twin sister Marion Lou Bennett, and brother Douglas Waite Wyckoff. Fred was born in Detroit. He was president of his sophomore class at Mackenzie High School, and won a scholarship to Cranbrook in Bloomfield Hills. In 1945 he joined the U.S. Merchant Marine Cadet Corps. He left in 1946 to attend Yale University on a scholarship, where he was part of the NROTC program. He was commissioned as an ensign in the U.S. Navy in September of 1950 and served for three years, first as a deck division officer aboard an amphibious transport, the USS Henrico, then as a personnel officer for the staff division on the same ship, where he participated in the withdrawal of Marines and Army personnel from Chosin Reservoir in North Korea. Fred was accepted to both University of Michigan and Harvard law schools, and he proudly chose U of M, where he was offered a position on the staff of the Michigan Law Review, but declined in order to devote time to his growing family. After graduation he joined the legal staff at New York Central Railroad, where he focused on litigation. He later worked for many years as in-house counsel for Michigan Bell Telephone, before joining the firm of Evans, Pletkovic and Rhodes in 2003. His family was honored to join him in 2006 to celebrate 50 years as a member of the State Bar of Michigan. A founding member of Northbrook Presbyterian Church in Beverly Hills, Michigan, Fred served in a variety of roles there, including as an elder and church treasurer. In his free time he loved to read, study history, avidly follow U of M football, attend meetings at VFW Post 6695, and most of all spend time with his family. In lieu of flowers, memorial donations can be made to the Wyckoff House and Association in Brooklyn, NY, https://wyckoffmuseum.org/, and Northbrook Presbyterian Church: https://northbrookpc.org/. A funeral service was held privately due to the COVID-19 virus.

The family of Frederic Leigh Wyckoff created this Life Tributes page to make it easy to share your memories.

Send flowers to the Wyckoff family.