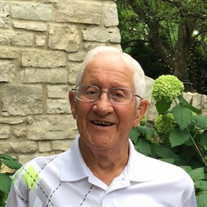 Fred Piercey December 10, 1923-May 30, 2021 Fred Piercey, age 97, died peacefully at home on May 30, 2021. Fred was born on December 10, 1923 in Newfoundland, Canada. As a toddler he and his family moved to Detroit, Michigan where his father worked for Ford Motor Company. Fred served his country in the Navy. He was just 18 years old in 1942, when he enlisted and served until he received an honorable discharge in 1946. Fred married Elaine in 1948. They have been married for a remarkable 73 years. They have 4 children and 24 grand and great grandchildren. Fred worked as a foreman for Diamond Automation until he retired in 1988. Never one to sit around idly, Fred found joy in all his projects and helping people. His ability to problem solve and find solutions made him popular with family, friends and neighbors alike. Fred had a zest for life that made him a joy to be around. He was kind and memorable to all who met him. He was once described as “a person who has never had a bad day”. Fred loved all sports and being outside, but his true passion was golf. He played golf until he was 94 years old, that’s what you call a lifelong sport! He would play as often as he could in all kinds of weather because “it never rains on the golf course and as long as he could find the ball, snow did not deter him. I mean why else would they make orange golf balls? One of Fred’s other passions was to watch his grandchildren play their sport of choice. Whether it be gymnastics, baseball, soccer, roller hockey or ice hockey, he was the biggest cheerleader in the stands! Fred was a person who loved life. He was a honest, hardworking, caring man who will be missed by family, friends and neighbors alike. Beloved husband of Elaine for 73 years. Loving father of Bill(Jana) Piercey, Karen (Chuck) Marsh, JoAnn (Doug) Fullerton and Judy (Ed) Brown. Dear grandfather of Amanda (Chris) Shumow, Matthew Piercey, Christine (Steve) Taylor, Shannon Hopson, Jeshua (Stephanie) Marsh, Kelsey (Matt) DeLuca, Adam (Gina) Fullerton, Devin Fullerton, Cole Brown and Connor Brown. Cherished great grandfather of Dylan, Fletcher, Greyson, Hutton, Arlo, Elle, Jaymes, Cooper, Hunter, Carlie, Briene, Drew, Aiden and Owen. There will be a private funeral service held on June, 8th, 2021 followed by a Celebration of life at Meadowbrook Country Club. In lieu of flowers, our family asks that a donation in Fred’s name be made to the Amyloidosis Foundation.

The family of Fred N. Piercey created this Life Tributes page to make it easy to share your memories.