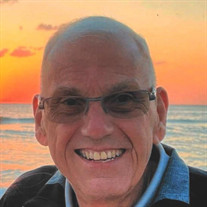 Penzato, Frank October 20, 2021 Age 75. Survived by his loving wife of 28 years, Debra Penzato. Loving father to Frank Penzato (Elyse), Stephanie Small, Jennifer Stevenson (Sean) and Ashley Penzato Grandchildren – Anthony, Nicholas and Julianna Penzato, Tristan Small, Connor and Avery Stevenson. Frank was born April 30, 1946 in Gary, Indiana. He is survived by his 102 year old dear mother, Fannie Penzato, and she resides in Crown Pointe, IN. Frank was preceded in death by his father, Nobie Penzato, his brother Russ (Kathy) Penzato. Frank graduated from Purdue-Calumet University in 1969 and went on to work in the steel industry for 44 years in various roles, with the majority of his time in Production Planning. He began his career at US Steel in Gary IN, joined Rouge Steel in 1984 and retired from Severstal NA in 2010. Frank was a devoted family man, liked to golf, and loved watching movies, especially John Wayne movies and his all-time favorite, The Godfather. He was an avid Cubs and Bears fan, and supported his alma mater, Purdue. He also enjoyed cooking shows and, as a true Italian, was known for his spaghetti sauce, lasagna and green beans. His smile and his singing voice could light up a room. He will be sorely missed as he was a great husband, father, role model for his grandchildren and genuinely a nice guy who was instantly loved by anyone who met him. Visitation will be on from 3 pm – 8 pm Thursday, October 28, 2021 at O'Brien/Sullivan Funeral Home 41555 Grand River Novi, MI with a rosary at 7 PM. Funeral Mass will be held at Holy Family Catholic Church 24505 Meadowbrook Rd, Novi, MI at 10:30 am on Friday October 29, 2021 with visitation 10 am until time of mass. A luncheon will follow. Donations can be made to the American Diabetes Association in his memory. Family will have a private interment at Michigan Memorial Park. Expressions of Sympathy www.obriensullivanfuneralhome.com

The family of Frank Penzato created this Life Tributes page to make it easy to share your memories.

Survived by his loving...

Send flowers to the Penzato family.