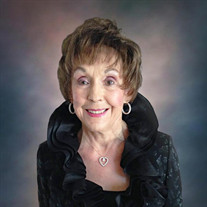 Northville Resident Esther Jean Churella Went to be with the Lord on August 19, 2021. Esther Jean Churella was born in Detroit, Michigan on September 28, 1931. She was the first of two daughters born to George and Anatascia Cranga, followed by her sister Ruth (John) Aghababian. She attended Brown City High School where she was a cheerleader. After graduating, Esther went to work at the Brown City Register of Deeds office. She also worked as a secretary at the Ford Motor Company. Smart, confident and ambitious, Esther certainly could have had a successful career, but she chose instead to devote herself to her husband and family. She married Bob Churella in 1953. They were blessed with three children, and Esther used her considerable talents and energy to create a wonderful loving home for Bob and the kids. Though Esther didn’t work again outside the home, she continued to pursue her many interests. Her love of music was a lifelong joy --- she played piano exceptionally, and with her beautiful voice, sang in her church choir for over 70 years. Esther also had a gift for fashion and design, becoming an expert seamstress and creating beautiful garments for herself and many others. She had a passion for architecture and interior design and her talent could be seen in her own and others’ homes as well as in her husband’s offices. Esther was a loving wife to her husband Bob for 67 years, until his passing last year. They were blessed with three children, Robert “Robb” Jr. (Diana), Mark (Leslie), and Melanie. They also joyfully welcomed six grandsons, Mark Jr. (Amy), Ryan (Danielle), Josh (Carlee), Nathan, Justice and James, as well as seven great-grandchildren, Jacob, Lola, Cruz, Ryker, Penelope, Brooks and Maverick. Esther’s unwavering love and devotion to her family was surpassed only by her faith in her Heavenly Father through her Lord and Savior Jesus Christ. Throughout her life, Esther was a kind, caring and generous woman. She will be greatly missed. Visitation at the Christ Presbyterian Church, 23455 Novi Road, Novi on Thursday, September 2, 2021 from 10:30 AM until the time of the service at 11:00 AM. Entombment will take place at Glen Eden Lutheran Memorial Park, Livonia.

Northville Resident Esther Jean Churella Went to be with the Lord on August 19, 2021. Esther Jean Churella was born in Detroit, Michigan on September 28, 1931. She was the first of two daughters born to George and Anatascia Cranga, followed... View Obituary & Service Information

The family of Esther Jean Churella created this Life Tributes page to make it easy to share your memories.

Northville Resident
Esther Jean Churella
Went to be with the...

Send flowers to the Churella family.