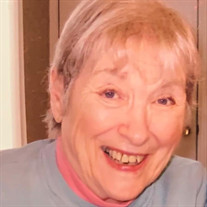 Emelyn Vera Tanner Obituary Emelyn V. Tanner, aged 91, passed away, peacefully, on October 8th, 2021. She was born November 1, 1929, along with her sister Evelyn, in Waterloo, Iowa, the daughter of Elsie and Harold Farr. She grew up in Iowa until her teens, when she moved to Detroit with her sister, mother and her stepfather Ralph Hullrich. She married John (Bill) Tanner on March 5, 1949. She is survived by her 3 children, Janet (Terry) Jones, Tom (Thelma) Tanner, and Bob Tanner, and her 5 grandchildren, Christina, Jonathon (Brittney), Brian, John (Nichole), and Jason, and 4 great grandchildren, Aeson, Bentley, Finnley, and Emma, her sister-in-law Betty (Dale) Harris, her nieces and nephew, Linda, Becky, Julie, Diane, Steve, and Kim. She is also survived by her special adopted family by way of Thelma, including Julia, Elaine, Jim and their many children and grandchildren. She has been preceded in death by her husband Bill, her sister Evelyn., and nephew Ricky. Emelyn had various jobs through the years, including retail, packaging, and dental assisting, but she was primarily a homemaker. She was family-oriented, with the cousins being one big interchangeable family. She was a devoted wife, and shared a love of card games, puzzles and reading with her husband. She was especially close to her twin, Evelyn, and lived within the same neighborhood or shared a summer cottage all their lives. She had eclectic tastes and was always willing to try something new. She introduced her son to both Led Zepplin and Nina Simone. She loved to visit with friends, shop and go out to eat. Through the years her faith in God became stronger and gave her great comfort. Her smile and love of life will be greatly missed. In lieu of flowers, memorial tributes may be directed to St. Jude Children’s Research Hospital. A visitation and funeral service for Emelyn will be held on Tuesday October 12, 2021 at the O'Brien/Sullivan Funeral Home located at 41555 Grand River Ave. Novi, MI 48375. The visitation will begin at 11:00AM and conclude at the start of the funeral service at 12:30PM. In the interest of safety for all, the family is requesting all visitors to the funeral home to wear masks. Thank you.

Emelyn Vera Tanner Obituary Emelyn V. Tanner, aged 91, passed away, peacefully, on October 8th, 2021. She was born November 1, 1929, along with her sister Evelyn, in Waterloo, Iowa, the daughter of Elsie and Harold Farr. She grew up in Iowa... View Obituary & Service Information

The family of Emelyn Vera Tanner created this Life Tributes page to make it easy to share your memories.

Send flowers to the Tanner family.