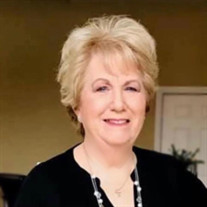 Donna Hohl, 81, passed away March 15, 2022 surrounded by love after her long battle with Pulmonary Pneumonitis. Donna was born on September 27, 1940 to Leona and Wilfred Govan in Detroit, MI. After attending Ladywood High School, she went on to pursue further education at Oakland County Schools Technical Campus where she graduated as a Certified Medical Assistant (CMA.) She went on to work as a CMA and Unit Tech through Southfield Providence Hospital Labor and Delivery as well as Providence Park Emergency Department. In 1959, Donna met Gregory Hohl at a drive-in movie theater in Detroit. Donna and Greg were married just six short months later on November 14, 1959 and went on to have five children: Tim (Mary,) Cheryl (James,) Michelle (Daniel,) Todd (Krista,) Annette (Daniel,) 14 grandchildren: Ryan, Sean (Marie,) TJ (Allison,) Meghan (Jacob Sr.,) Joseph, Ashley, Mathew, Jacqueline, Mollie (Sean,) Kathryn, Rielly, Tyler, Jack and William and seven great - grandchildren: Charlie, Peter, Jackson, Madelyn, Sawyer, Jacob Jr. and Isabella Donna was active in her community in many ways including serving as the President of the Police Officer’s Wives Association, coaching cheerleading, and volunteering for the Catholic Church including teaching Catechism. She also won many trophies as an avid bowler. Donna was a beautiful example of strength and faith as she devoted her life to supporting her children. In the late 1990s, Donna retired and spent her time with Greg at their home in Charlevoix, MI where they enjoyed the northern Michigan shoreline while creating memories with visiting family and friends. Whether she was traveling to multiple states to watch a hockey game, keeping up on the score of the football game, climbing on a park bench for a better view of a cross country run, clapping the loudest at a pageant or listening to the tunes of the high school band, she was known as her grandchildren’s biggest fans. She believed in the potential of each and every one and prayed for them daily. Slammer, as she was nicknamed by her grandchildren, has left a permanent mark of love on each of their hearts. Donna was predeceased by her husband Gregory Hohl, her mother Leona Govan, her father Wilfred Govan, and her brothers Jack and Robert Govan. We will celebrate her life at O’Brien Sullivan Funeral home in Novi on Friday, March 18 from 3:00 – 8:00 pm. Mass will be celebrated Saturday morning March 19 at 9:00 am at St. James Parish on 10 Mile Road, Novi. In lieu of flowers, Donna requested donations be made to her grandson William who has severe autism. Donations will be placed in a trust to provide lifetime housing and care for him in the future after his parents pass away. https://gofund.me/b06cf3e6 Please also consider a donation to Catholic Central High School Cross Country or Track Teams in honor of her grandson, Jack CC ’23: https://catholiccentral.myschoolapp.com/page/giving?siteId=1178&ssl=1

Donna Hohl, 81, passed away March 15, 2022 surrounded by love after her long battle with Pulmonary Pneumonitis. Donna was born on September 27, 1940 to Leona and Wilfred Govan in Detroit, MI. After attending Ladywood High School, she went on... View Obituary & Service Information

The family of Donna M. Hohl created this Life Tributes page to make it easy to share your memories.