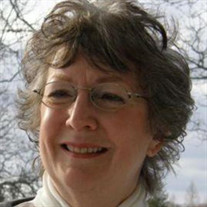 Diane L. Williams, 80, Novi, Michigan, passed away peacefully of early-onset Alzheimer’s disease on April 28, 2020. She was the daughter of the late Arthur and Louise Papke, sister of the late Suzanne (Papke) Hughes, and beloved wife of Robert C. Williams, and mother of Blake Williams of Pennsylvania. She had three grandchildren, Madison, Chandler, and Phillip. Diane was widely known for her compassion and outgoing personality. She always had a smile and enjoyed conversations with those around her. Throughout her life, she had many passions. Her knitting and sewing skills were well known. She was an accomplished artist, gourmet chef, gardener, and author. She traveled the world with her husband, Bob, and son Blake. She was a member of many community and church choirs over the years, and even sang on stage at Carnegie Hall. Her education spanned many schools including the prestigious Cass Tech High School, in downtown Detroit, where she won a National Merit Award for her paintings. After graduation, she was hired as a calligrapher for the J. L. Hudson Company’s display department, in Detroit. When she married her husband, Bob, in 1961, she moved to Brooklyn, NY where he was a faculty member at Brooklyn College of the City University of New York. Diane continued her hand lettering in many high-end stores in NYC, as a freelance artist. Their son, Blake was born in Brooklyn, in 1964. In 1966, she traveled to Zambia, Africa with her husband, and son. Bob took a job with the U.S. State Department as a contract employee for the Zambian government. After her return, Diane published a book about her experiences, Tribal Masks: A Woman’s Search for Self. When she returned from Zambia, she completed her higher education, and became a Senior Registrar at several colleges in New York. Throughout the 1960s, 70’s 80’s and 90’s Diane and her family traveled the world. In 1995, Diane and her husband moved to a home they built at Canada Creek Ranch in Northern Michigan. Diane was very familiar with the Ranch as her parents and family had a home there. In 2008, Diane and Bob moved to Fox Run Village in Novi, to be their final retirement home. Diane’s life was filled with happiness and accomplishment throughout her amazing journey. Her friends and family will miss her bright smile, her keen wit, her endless compassion, and her many talents will be long remembered by all who knew her. In lieu of flowers, memorial contributions in memory of Diane Williams: Fox Run Resident Memory Care Fund ATTN: Philanthropy 41200 Fox Run Road Novi, MI 48377 Expressions of sympathy www.obriensullivanfuneralhome.com or if sending a condolence please send to O'Brien/Sullivan Funeral Home C/O Diane Williams 41555 Grand River Ave Novi, MI 48375.

Diane L. Williams, 80, Novi, Michigan, passed away peacefully of early-onset Alzheimer&#8217;s disease on April 28, 2020. She was the daughter of the late Arthur and Louise Papke, sister of the late Suzanne (Papke) Hughes, and beloved wife of... View Obituary & Service Information

The family of Diane Louise Williams created this Life Tributes page to make it easy to share your memories.

Send flowers to the Williams family.