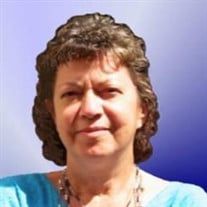 Diane Marie Taylor, passed on Friday, January 15, 2021 in Detroit at the age of 78. Diane is survived by her loving sons: Harold (Madeline), Thomas (Laura) and Edward (Jill), her sister Fran and grandchildren Megan, Donny, Michelle, Ashley, Chris, Clifford, Justin and Jessica and great grandchildren Kaden, Robert, Ariannah, Damien, Anna and Lorelei. Diane was born and raised in River Rouge, MI but called Detroit home most of her life where she had become a fixture in her neighborhood known by all around as ‘Miss Diane’. She published the neighborhood newsletter and helped organize the neighborhood for civic action when called for. Most importantly she opened her house to all the children of the neighborhood where she would encourage and guide them to become artists and great souls. Diane was an artist to her core. She studied art early in her life and it became a major part of who she was. She has created many works of art on canvas, sculpture, and through her writings. Through her art she was always trying to connect this world to the spiritual realm from her paintings of angels and her books of poetry and spiritual insights. Diane self published 6 books including a book of poetry as well as a detective novel set in Detroit. In addition she has had paintings proudly hung at the War Memorial in Grosse Pointe. Diane tirelessly gave of herself all her life. First and foremost she gave herself to Jesus and Mary in spiritual devotion and then to her family and especially to her beloved grandchildren. She welcomed foster children of all ages into her home and opened her home to a student from China later in her life. At various times she was a teacher, nurse’s assistant, and a regular volunteer with St Vincent DePaul and other charitable organizations. She will be missed greatly in this world by many but has been joyfully welcomed into the next. You may visit Diane’s website http://www.dianemarietaylor.com/ if you want to see more of her work and thoughts. Visitation at the O'Brien/Sullivan Funeral Home, 41555 Grand River Avenue, Novi on Monday, January 18, 2021 from 5:00 PM - 7:00 PM. Instate at Sacred Heart Church, 1000 Eliot Street, Detroit on Tuesday, January 19, 2021 from 10:00 AM until time of liturgy 11:00 AM. Memorial donations maybe made to the Pope Francis Center, 438 St. Antoine Street, Detroit, MI 48226 or www.popefranciscenter.org.

The family of Diane Marie Taylor created this Life Tributes page to make it easy to share your memories.

Send flowers to the Taylor family.