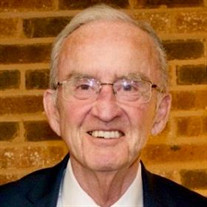 David Livingston Brown, 84, passed away on Saturday, January 26, 2019 at Ascension Providence Hospital in Novi. He was born on July 6, 1934 in Joliet, Illinois; the son of Rev. Jesse W. and Harriet (Newkirk) Brown, who both tragically died in a car accident when Dave was 27 years old. Dave graduated from Canton High School (Canton, IL) in 1952. He attended Olivet Nazarene College (Bourbonnais, IL) and graduated from Pasadena College (Pasadena, CA). He received his Master degree from Eastern Michigan University in Educational Administration. Dave enlisted in the U.S. Army Reserves while attending college and was honorably discharged in 1963. He married Jeridel Ann Hardy on December 28, 1957 in Oklahoma City, Oklahoma. Upon graduation from Pasadena College, they moved to Kansas City, Kansas to pursue ministerial studies. Dave’s course of vocation changed and he worked for General Motors; and then in 1966, moved to Michigan with Alexander Hamilton Life Insurance Company. He eventually pursued a career in education and became a teacher in the Novi School District in 1968. In 1971, a new Novi school opened, Village Oaks Elementary, where Dave remained the principal for the next 31 years. Thousands of children walked through the doors of Village Oaks and their lives were positively impacted by a “kinder, gentler” principal. Dave retired in June of 2002 with 34 years of service in the Novi School District. After retirement, Dave served in a different capacity, the Novi School Board, giving direction to a growing school district. At the time of Dave’s passing, he was an active member of Hilltop Church of the Nazarene in Northville. Throughout his life, Dave has been a dedicated member of the Church of the Nazarene where he served for many years as a teacher and board member. He was dedicated to mentoring men in their lives and guiding them toward a meaningful relationship with God through Biblical study. Dave was an avid sports fan and longtime athlete. He played baseball, basketball, and continued to play tennis until recently. He would often be seen at Novi sporting events cheering on the Novi athletes and wearing his Novi Wildcats jacket with pride, along with his Chicago Cubs cap. David is survived by his wife of 61 years, Jeridel Ann; his sons Mark (Candace) Brown and Gregory (Judy) Brown; grandchildren Kelli (Brandon) Juodikis, Logan Brown, Jacqueline Brown, Benjamin Brown, William Brown, Graham Brown, Tobin Brown, and Elizabeth Brown. He was preceded in death by his parents, Jesse W. and Harriet G. Brown; his sister, Betty J. Webster; and his brother, Robert W. Brown. Visitation will be at the O’Brien/Sullivan Funeral Home, 41555 Grand River, Novi, on Friday, Feb 1 from 4-8 pm. The family will receive friends and family on Saturday, Feb 2 at Hilltop Church of the Nazarene, 21260 Haggerty Rd, Northville from 10 am until the Memorial Service at 11 am. Donations in Mr. Brown's name may be made to David L. Brown Memorial click here to contribute

David Livingston Brown, 84, passed away on Saturday, January 26, 2019 at Ascension Providence Hospital in Novi. He was born on July 6, 1934 in Joliet, Illinois; the son of Rev. Jesse W. and Harriet (Newkirk) Brown, who both tragically died... View Obituary & Service Information

The family of David Livingston Brown created this Life Tributes page to make it easy to share your memories.

Send flowers to the Brown family.