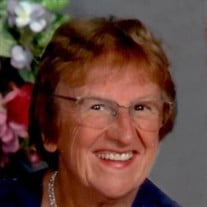 Darlene Eugene (nee Smith) Berent, 85, of Highland Michigan, passed away Thursday, Dec 24, 2020, after battling complications from surgery. In his wisdom, Jesus welcomed her home, where she was reunited with her soulmate, John Berent, who preceded her in death 2 years ago. Darlene was born September 11, 1935, in Winnipeg, Canada, and grew up in the Elmwood neighborhood of Winnipeg, where she was salutatorian of her Lord Selkirk High School senior class. She was quite athletic, and for a number of years held the provincial record in Manitoba for the 60 yard dash and softball throw. She won a 50% scholarship to attend University of Manitoba, but God had different plans. At age 18 she moved to Chicago, Illinois, and worked as a secretary at the Lutheran Aid Society. It was there that she met John at a Chicago ballroom, when she was dating one of John’s friends. But they were drawn together, beginning a 63 year journey of love, caring, and family. They were married April 28, 1956, and very quickly began their family of 3 boys and 1 girl in John’s hometown of Detroit, soon moving to a new home in Madison Heights. Throughout her children’s schooling, Darlene was actively involved in their lives; as a room mother, a volunteer, the loudest cheerleader at all sporting events, and pseudo-Mom to many of the neighborhood kids. She was a loving and generous Mom, who taught her kids that family always comes first, traditions are a wonderful legacy, and any adversity and sorrows can be faced with the support of family and friends. Darlene was a force of nature, who raised four strong, independent children, each of whom sought their own path, guided by her powerful encouragement and example. It is because of Darlene that the family is so closely knit today. Family or friend, she greeted everyone with a smile, and created fabulous family meals and an endless array of homemade Christmas cookies. She loved hosting parties and events, and thrived in the role of Hostess. Darlene was active in the General Federation of Women’s Clubs, holding a variety of offices first at the Madison Heights Club, then at the State level, culminating in her role as GFWC Michigan State President from 1980-1982, and Convention Chair in 2012 and 2019. She was designated Michigan Woman of Achievement in 2005, GFWC Woman of the Year in 2011, and Jennie Award winner in 2016. She was also deeply involved in Democrat politics, at the local, state, and national level. She attended the Democrat National Convention in 1992. Although primarily a stay-at-home Mom, once her kids were grown she worked for many years for the UAW at their Region 1 Headquarters. An inveterate traveler, Darlene and John visited over 80 countries, and spent time on all 7 continents. Darlene also set a wonderful example with her charitable involvement. Girlstown, Gateway Counseling Center, The Kasey Foundation, the Lutheran Church, John Dewan Foundation, as well as the general GFWC charities, all benefitted from her leadership. For several decades she would don an Easter Bunny suit and visit senior citizen centers and children’s hospital wards, passing out candy and treats, and bringing a smile to those in need. In addition to her husband, Darlene was preceded in death by her mother, Lillian; father, Edward; sister, Florence Pietracci; and granddaughter, Kasey. She is survived by a brother, Sid Smith (Sharon), a sister, Frances Adolph; 3 sons, Daniel (Barbara), Bryan (Allison), Matt (Cathy), and daughter Sandra; and grandchildren, Stephanie Studt (Daniel), Christopher Berent, Brookelle Gragg, Nicholas Berent, Travis Gragg, Erica Berent, Cassidy Gragg, Mason Clark (Michelle), and Leah Schulenburg (Matthew); great-grandchildren Liliana Schulenburg, Solomon Schulenburg, Eleanor Clark and Harrison Clark, and numerous loving relatives and friends. An opportunity to pay last respects, immediately followed by a funeral service and celebration of life will be held at 10 a.m. Wednesday, Dec. 30, 2020, at St. Matthew Lutheran Church, 2040 S. Commerce Road, Walled Lake. In lieu of flowers, donations can be made to the Kasey Berent Foundation, 8 Buxton Road, West Middlesex, PA 16159.

Darlene Eugene (nee Smith) Berent, 85, of Highland Michigan, passed away Thursday, Dec 24, 2020, after battling complications from surgery. In his wisdom, Jesus welcomed her home, where she was reunited with her soulmate, John Berent, who preceded... View Obituary & Service Information

The family of Darlene Eugene Berent created this Life Tributes page to make it easy to share your memories.

Send flowers to the Berent family.