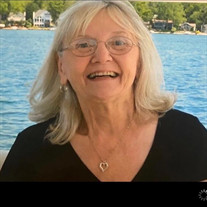 On Thursday, May 21st, 2020, Darle Lynn Tobel, age 85, passed away at her home in Novi, Michigan. She was a loving wife to Charles, who preceded her in death on May 21st, 1986, exactly 34 years prior to her passing. She was a cherished mother, grandmother, great grandmother, family member, and friend to many. Darle was born in South Bend, Indiana on June 15, 1934 to Hazel and Gerald Curwin. As a young girl she spent significant time with her grandparents and they played an important role in her life. She was very close to her two siblings and adored both her younger brother Gerald who lives in Florida, and half-sister Leanna who proceeded her in death. She and Gerald, who everyone called Sonny, grew up in Indiana and then moved to Berkley, Michigan. They lived with their father and dear stepmother Gail. Darle was 18 when she met Charles Tobel, they married and moved to Kentucky while he was in the service. When his tour of service finished they settled in Michigan and raised 5 children, daughter Lynn Wieties (Bill), son Kevin (Mary Lynn), son Charles (Carol) and daughter Beth Tobel. Daughter Laurie Tobel passed away in April 2014. In addition to five children, Darle was blessed with 11 grandchildren and counted their spouses as her grandchildren too. Joshua (Soo Jin), Jacob(Nilu), Jenna (Matt), Whitney, Kiley (Steven), Paul (Megan), Samatha (Kyle), Roya (Andy), Ty and Charles were all close to their grandmother. Amanda Marjan passed prior to birth, but was always remembered by Darle. She was also a proud great- grandmother to 16, and this filled her life with joy. She felt very close to her great-grand daughter Caelyn Ann Cash who proceeded her passing. Darle was known for her laugh and great sense of humor, one of her favorite sayings was “God loves laughter”, and she did too. In her younger days she enjoyed playing the piano, took great pleasure in home decorating and never tired of changing the paint, wallpaper, or rearranging the furnishings. Professionally, she always wanted to be a registered nurse and, while raising a young family, started with night school, finally graduating with a degree in nursing, and then working in hospice and psychiatric nursing. Throughout her life, her nursing books were never far from her reach. She worked hard for her nursing degree and maintained a current license into her early 80’s. At the center of Darle’s life was her Faith and her family. Family included her nieces, nephews, brother-in-laws, sister-in-laws, cousins, and friends that were as close to her as family. She took care of her mother Hazel in her later years, and this is something she treasured. Darle was a member of the Baha’i Faith and loved to discuss things of a spiritual nature. She taught prayers to her children and grand children that they still remember today. Darle had a special heartfelt and personal interest in ways to support services for those with autism. Her grandson Ty is autistic, they were very close and he would call her every evening to make sure she was doing well. In lieu of flowers the family invites anyone that would like to make a charitable contribution as a remembrance in Darle’s name to go to thewebsite: bobbydodd.org and select ways to give. Due to current public health restrictions a visitation is not possible at this time. A graveside service will be held on May 27th, 2020 at 10:00 a.m. at the Southfield Cemetery, Southfield, Michigan. At a future date, when public health conditions allow, the family intends to hold an open memorial in remembrance of Darle and in celebration of her life.

On Thursday, May 21st, 2020, Darle Lynn Tobel, age 85, passed away at her home in Novi, Michigan. She was a loving wife to Charles, who preceded her in death on May 21st, 1986, exactly 34 years prior to her passing. She was a cherished mother,... View Obituary & Service Information

The family of Darle Tobel created this Life Tributes page to make it easy to share your memories.

Send flowers to the Tobel family.