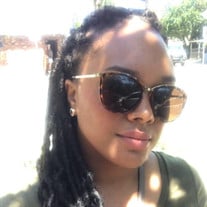 Courtney L. Croslin March 20, 1990 – June 26, 2021 Married on June 2, 2012 to her beloved Jimmy Croslin. Loving and Devoted Mother of Haven & Ember. Cherished daughter of Angela Steed & Elliott Walker Adored stepdaughter of Morris J. Boyd lll Sweet sister of Brittany (Sean) Devaney, Adara Boyd & Morris Darby-Boyd (MJ) Sister-in-Law of Kristina “Kristy” (Antwan) Wade Auntie of Harrison (Bubs), A.J., Anthony and Leah. Daughter-in-law of Debbie “mom” and the late Jim Croslin “dad.” Loving Granddaughter of Joshua & Peggy Steed and James R. & Mattie Bell Walker who preceded her in death. She also leaves behind many special family members. Courtney was always keeping herself busy. She was constantly coming up with new and interesting hobbies (knitting, crocheting, skiing, canoeing to name a few), taking up whatever struck her fancy. She spent her most cherished days making memories with her daughters creating and displaying beautiful works of art that they proudly displayed….everywhere. She had a love of painting and photography (which she shared with her sister Brittany, a talent neither received from their parents!) Prior to her death she started a new hobby…”People Watching” with the new high-powered binoculars she received from her mom that allowed her to be “nosy” from her chair by the “big window” in her bedroom. Much laughter could be heard as she “spied” with delight on her kids and nephew playing below...or neighbors acting suspiciously from across the yard...to the birds perched in trees as far as she could see! Courtney dabbled in everything. She was an aspiring Author (she wrote a fabulous short story that she one day wanted published!). Courtney was a proud Huron River Rats Athlete. Courtney awoke one day much to her mother’s shock and announced “I am going to run track.” Well not only did she run track...she ran in track meets and became one of the fastest “sprinters” on her track team! Courtney was a Varsity Cheerleader because JV just was not in her sights, she went on to become Captain! Courtney loves reading (Nicholas Sparks’s “Safe Haven” being one of her favorite reads. She was an avid shopper, according to her husband Jimmy. Barnes and Noble along with Amazon earning top honors in her joy of spending! All with Jimmy’s financial support!!!! Courtney had a passion for political and social injustices, and spent her time even through her pain advocating for those she felt were treated poorly based on religious, ethnic, social or sexual orientation. She stood for what she believed. Courtney was a Mentor whenever possible, and along with her sister coached and mentored young girls. Courtney holds a master’s degree from Eastern Michigan University in social work. She was able to put her degree to use by working for a non-profit called First Step where she served as an Advocate for Domestically Abused women and Mistreated or Underserved children. She was also part of Zeta Sigma Chi Sorority where she created a lifelong sisterhood with her radiant peaches (her sororZ). A visitation for Courtney will be held on Monday, July 5th at O’Brien/Sullivan Funeral Home from 2:00 PM until 8:00 PM. On Tuesday July 6th at North Ridge Church there will be an instate period from 10:30 AM until time of Courtney’s funeral service at 11:00 AM.

The family of Courtney L. Croslin created this Life Tributes page to make it easy to share your memories.

Send flowers to the Croslin family.