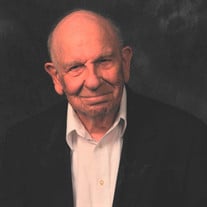 Clarence Norman Vogel passed away on June 18 in Novi, Michigan after 94 years of life. The son of Clarence Norman Vogel, Sr. and Margaret Esther Vogel, he was born in 1924 in Cleveland. He grew up on the west side of Detroit and attended Mackenzie High School. His life was defined by his service to his country, family, the Catholic Church and Ford Motor Company. A graduate of University of Detroit, he served for nearly 40 years as a chemical engineer for Ford Motor Company and helped establish the company’s emission control program. Clarence served in the Army for three years during WWII, including 11 months in the Central Pacific Theater, where he received two battle stars. He married the love of his life, Elaine Doran Vogel in 1954 -- she passed in 1991. Their love for one another was palpable to anyone lucky enough to be in their lives. Faith was central to his identity. Clarence converted to Catholicism in the ninth grade and served the Church faithfully for the rest of his life as an eucharistic minister, lector and member of the parish council. Clarence was an avid reader, jazz enthusiast, fisherman, golfer and wine lover. He had a great respect for the environment and supported several causes including the Great Lakes initiative to restore the natural fisheries and the Nature Conservancy. He is survived by 11 children: Chuck (Lori), Curt (Jan), Paul (Cindy), Mary Wagner (Tim), Vincent, Robert (Linda), Patricia Valli (Jack), Jean Dietz(Paul), Janet, Elizabeth Blaesser (John) and Margaret Hunter (Jeff), and the late Chris, in addition to 20 grandchildren and four great-grandchildren. His retirement was punctuated by games of golf, vodka tonics, a vicious Scrabble habit and a daily crossword puzzle. Visitation at the O’Brien/ Sullivan Funeral Home 41555 Grand River Novi 248-348-1800 Sunday, 2-8 pm. Instate at St. James Church, 46325 Ten Mile Road, Novi, MI 48374 , Monday 10:00 am until the funeral Liturgy at 10:30 am. Interment Holy Sepulchre Cemetery In lieu of flowers donations may be made to the Nature Conservancy www.nature.org

Clarence Norman Vogel passed away on June 18 in Novi, Michigan after 94 years of life. The son of Clarence Norman Vogel, Sr. and Margaret Esther Vogel, he was born in 1924 in Cleveland. He grew up on the west side of Detroit and attended... View Obituary & Service Information

The family of Clarence Norman Vogel created this Life Tributes page to make it easy to share your memories.

Clarence Norman Vogel passed away on June 18 in Novi, Michigan...

Send flowers to the Vogel family.