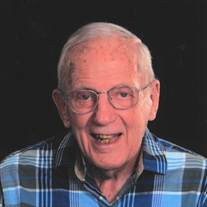 Charles Joseph Anstett, 92, passed away peacefully October 19th, 2021. He was a loving and kind soul with strong faith and love of family. Eldest son of Albert and Cora (Gehl) Anstett, he grew up in Detroit with his brother, Bob and sister, Kathleen. As a teen, he loved playing baseball and visiting the family farm near Kitchener, Ontario. He worked different jobs to pay his way through the all-boy’s Catholic Central High School. He met his “darling”, Odette, when his younger brother, Bob, invited him to a St. Theresa High School dance. Charles and Odette shared a deep faith; saying rosary with each other’s parents, praying to Mary for her guidance and protection. He served during the Korean War, stationed in Fort Bragg, NC. The couple wrote letters daily filled with love and plans for their future family. They wed in August 1952 and began married life on base. He was a printer by trade and worked at George Willens, in downtown Detroit for 25 years as typesetter and graphic designer. Later, he worked as graphic designer for Ford Motor Company, retiring from there after 14 years. Charles was a wonderful example of Catholic faith. He was a catechism teacher, church usher and lector at his parish, St. Francis Cabrini in Allen Park, for 45 years. He worked hard and sacrificed to give all his children a Catholic education. He and Odette enjoyed the support of a close-knit group of friends who they managed to socialize with even with 7 active children. He loved gardening, birdwatching, Tiger baseball and Red Wing hockey, polka dancing, playing the harmonica and a good beer (Ein Prosit!). But most of all he loved his family. While we mourn the loss of his strength and comfort in our lives, we know he is now at peace, and we thank him for showing us how to live a life of love and happiness. Charles is survived by his wife, Darling Odette. Seven children: Louis (Aurora) Anstett, Stephen (Terri) Anstett, David Anstett, Philip (Michelle) Anstett, Melanie (Lorrie) Anstett, Michelle Cottrell and Matthew (Brad) Anstett; thirteen grandchildren: Jennifer, Kristin, Danielle, Nicole, Andrea, Bret, Conor, Austin, Cooper, Phoebe, Nathan, Lauren, and Katherine and seven great-grandchildren: Emerson, Adeline, Benjamin, Reegan, Beckett, Lucy and recent arrival, Luke. He is also is survived by his brother and sister-in-law, Robert and Estelle Anstett; his sister-in-law and brother-in-law, Madeleine and Fred Johnson, many nieces and nephews, Amy Hagerman Anstett, and Steve Cottrell. He was pre-deceased by his parents, and sister and brother-in-law, Kathleen and Frank Dec. Visitation 2-5 pm Sunday, October 24, 2021 at the O'Brien/Sullivan Funeral Home 41555 Grand River Ave, Novi, MI. Funeral mass 10:30 am Monday, October 25, 2021 at Holy Family Catholic Church 24505 Meadowbrook Rd, Novi with visitation 10:00 am until time of mass. Interment Holy Sepulchre Cemetery, Southfield, MI. In lieu of flowers, tribute donations can be made to the Capuchin Soup Kitchen of Detroit in his memory here

Charles Joseph Anstett, 92, passed away peacefully October 19th, 2021. He was a loving and kind soul with strong faith and love of family. Eldest son of Albert and Cora (Gehl) Anstett, he grew up in Detroit with his brother, Bob and sister,... View Obituary & Service Information

The family of Charles Joseph Anstett created this Life Tributes page to make it easy to share your memories.