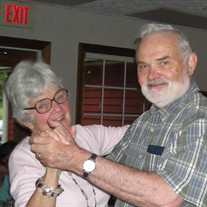 Carol Rice Squires, 84, died peacefully on June 21, 2021. Carol was a lover of long sunny days––so passing on the summer solstice was a fitting sunset to her life after a battle with Alzheimer’s. Carol was born on July 12, 1936 to Kay Kluz and Betty Schuler Kluz. She grew up in Pittsburgh, PA, where she attended Ambridge High School along with her sweetheart Robert (Bob). They met and fell in love at 13, and never looked back. Bob passed away on November 6, 2011, ten years before Carol. Now they are reunited after a lifetime of loving each other––spending forever together. After getting married in 1957, Bob and Carol made their way to Ann Arbor, MI where Bob completed his PhD and they started their family. Alas, Carol’s dream of having three sons went unfulfilled, and they instead welcomed three daughters in the space of 36 months! When Bob graduated and accepted a job at Purdue University, the family settled in West Lafayette, IN at 807 N. Salisbury where they spent their life together for over 50 years. Carol had a love for theatre, both in the audience and on stage. In local community productions, Aladdin, Pinocchio, and the Tin Man were just a few of the magical roles Carol brought to life for her adoring fans, the biggest of whom were her daughters. But “Mom” was the role she took most seriously and truly mastered. Carol worked at home to raise her children––planning birthday parties, baking chocolate chip cookies, hosting taco dinners and making her world-famous “swim team” jello. She attended every volleyball game, swim meet, and theatrical event of her children…often sewing her daughters’ costumes herself. Carol was always on the sidelines, and always her children’s biggest fan. Carol and Bob shared a love for travel they instilled in their daughters at a very early age. From tent adventures to their Wildcat trailer, to special nights at Howard Johnson’s, the family travelled and camped from coast to coast visiting nearly every national park…hiking trails and singing songs that were later passed down to their grandchildren and greats. As a professor, Bob took a sabbatical at every opportunity, allowing Carol and him (and in early days, their kids) to live in California, England (Manchester, Bradford and London), and Australia. Time spent in England fostered a deep and steadfast love for all things British, which took them back to their beloved Lake District every summer for 20+ years. They documented their wanderings over every mountain pass, tarn and fell and shared this pleasure annually with their children’s families. Their love of British biscuit (cookie) tins began as something to do at a flea market, and developed into collecting well over 600 tins that they displayed throughout their home. They delighted in adding to their collection with every trip to England, each a lovely reminder of places and people that were most dear to them. When home in West Lafayette, Carol was a loyal Boilermaker (the Purdue football team), never missing a home football game or tailgate…and cheering with friends in the stands. When Bob became an amateur pilot, it made perfect sense to Carol to get her pilot’s license, too…which she did to have “just in case.” Together they logged hours and hours of flight time for family vacations to Sanibel Island, Green Turtle Key, Mackinac Island, Smoky Mountains and the Shades to name a few––with everyone allowed just one pillow case to pack in. Carol was an avid reader and book collector, gardener, and bird watcher. She spent many relaxing summer evenings sitting on their lovely screened porch, devouring a good book and sipping a glass of wine or a G&T…with the door always open to friends and family. PEO was an especially meaningful organization to her, giving her the opportunity to gather with like-minded women in friendship, learning, and community service. Her reach touched countless young people in the community through her years as the “Lunch Room Lady” at Cumberland Elementary School and volunteering at the West Lafayette Public Library. In her final years––even throughout her illness––her zest for life, quick wit and infectious personality continued to shine through. Carol was adored by Bob and will be forever loved and cherished by their three daughters: Susan Squires Zielke, Wendy Squires Hazlett (husband Dave) and Karen Squires McFarland (husband Rob); and their five grandchildren: Katie Elverman (husband Dennis and great-grandsons Jack and Will), Daniel Hazlett, Matt Zielke (wife Janna and great-granddaughter Cadence), Anna Troiano, and Sam Troiano. Please join us for a joyous celebration of Carol’s life on October 16, 2021 (1:00pm) at Covenant Church, 211 Knox Dr, West Lafayette, IN 47906. Donations in Carol’s honor can be made to the Alzheimer’s Association - click here or the National Trust - click here or print out the form and mail your donation to: National Trust Donations, Heelis, Kemble Drive, Swindon, England SN2 2NA. “If there ever comes a day when we can’t be together, keep me in your heart, I’ll stay there forever.” ~ Winnie-the-Pooh

The family of Carol Rice Squires created this Life Tributes page to make it easy to share your memories.