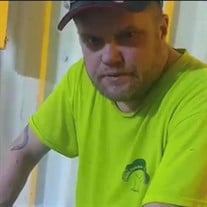 Carl Alan Wisuri of Plymouth, Michigan, died of natural causes on Saturday, October 10, 2020 at Fountain Bleu Health and Rehabilitation Center in Livonia, Michigan. He was 55 years old. Carl was born April 2, 1965, to Melvin and Doris Wisuri in Detroit, Michigan. He was the second youngest of nine children. He graduated from Churchill High School in Livonia. He was employed as a processing technician at Korex Corporation in Wixom, Michigan. Carl is survived by four sisters: Susan (George) Bekkala of Mountain Iron, Minnesota, Kathleen (James) Shoner of Highland, Michigan, Janice Batts of Livonia, Michigan, Sharon Kearis of Highland, Michigan, and three brothers: Paul (Janet) of Ishpeming, Michigan, Thomas (Carina) of Snowflake, Arizona, and Michael of Plymouth, Michigan. He is also survived by numerous nieces, nephews, great-nieces and great-nephews. He was preceded in death by his parents, Melvin and Doris, his younger brother Martin Wisuri, and two nieces, Michelle Wisuri and Trudy Larson. A memorial service will be held at a future date, when Carl's ashes will be interred with his parents in the Humboldt Cemetery in Humboldt, Michigan.

The family of Carl Alan Wisuri created this Life Tributes page to make it easy to share your memories.

Send flowers to the Wisuri family.