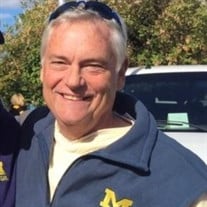 NOTE THE SERVICE SCHEDULED FOR JANUARY 15, 2022 HAS BEEN POSTPONED. In an abundance of caution, the Celebration of Brien’s Life has been postponed to a later date, yet to be determined. Please check back to this page for updates. THANK YOU FOR UNDERSTANDING DURING THESE DIFFICULT TIMES. Brien Wassman, 67, passed away suddenly at home in his sleep on November 30, 2021. Brien was born in Dearborn, Michigan on Sept. 13, 1954 to Roger and Sally O’Brien Wassman. Brien married the love of his life, Tina-Marie, and they were married for 36 years. Brien and Tina were blessed with a loving family of Patricia Law (sister), Michael (Sue) Wassman (brother), Solveig Tutschek (mother in law) and Eva Tutschek (sister in law); 5 nieces: J’aime (Nacho Madrazo) Law, Caitlin (Dave) Law, Correy Law, Christina (Scott) DeVries, Missy (Eliza) Wavis; 2 great nieces: Taylor and Jordyn DeVries; 2 great nephews: León and Iggy Madrazo; and 6 Godchildren: J’aime Law, Laura Wicks, Emily Scheidt, Correy Law, Missy Wavis and Andrew Pozniak. Brien was predeceased by his parents Roger and Sally O’Brien Wassman and Tina’s father, Gilbert Tutschek. Brien enriched the lives of his family and many friends. Brien graduated from Clarenceville High School, in Livonia, Michigan in 1972. He then attended the University of Michigan from 1972 until 1976, graduating with a Bachelor of Science in Civil Engineering. He worked on campus at his alma mater in facilities management for many years. Following, Brien began his own construction and facilities company, O’Brien Construction Services. 5 years ago Brien and Tina started TNC Events, an event management company, in which Brien was the backbone, entertainer and host. Brien’s passion was giving of his time and talent - one of his favorites was giving back to the University of Michigan. As a leader, Brien was a two-time president of the UM Club of Greater Detroit. While an active member of the club, Brien chaired annual and special club events such as the Football Bust, Golf Outing, and The Great Debate. Brien was a champion of maintaining the club’s and university’s great history and traditions. Especially the Club’s awarding the M Ring annually to the football seniors. Brien hosted the greatest pre-event tailgates, serving up his legendary Bloody Mary’s with his maize and blue BDUB flag waving overhead. A Celebration of Brien’s Life and Legacy that was going to be held On January 15, 2022 has been POSTPONED to a date and time, yet to be determined. In lieu of flowers, the family requests that donations be made to the University of Michigan Club of Greater Detroit Scholarship Fund in Brien Wassman’s name. The link to donate is: https://leadersandbest.umich.edu/find/#!/give/basket/fund/708600

NOTE THE SERVICE SCHEDULED FOR JANUARY 15, 2022 HAS BEEN POSTPONED. In an abundance of caution, the Celebration of Brien&#8217;s Life has been postponed to a later date, yet to be determined. Please check back to this page for updates. THANK... View Obituary & Service Information

The family of Brien Wassman created this Life Tributes page to make it easy to share your memories.