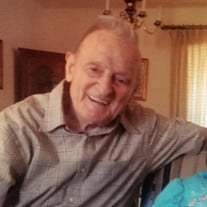 Benjamin F. Harpster Jr. 94 February 5, 2019 Benjamin was born in New Brighton, Pennsylvania on October 24, 1924 to the late Benjamin Franklin Harpster Sr. and Grace (Hilliard). When he was 17 his father gave him permission to join the US Navy and he served in WWII. He served aboard the USS Ulhmann as a Gunners Mate Second Class USNR from 1944-1946. He received the following awards: Combat Action Ribbon Philippine Liberation with two stars, Asiatic-Pacific Campaign Medal with seven battle stars, World War II Victory Medal, Good Conduct Medal,and the Navy Occupation Medal with "Asia" clasp. for his efforts. Ben and his shipmates served gallantly in helping the United States Navy and Armed Forces achieve victory in the Pacific War. Benjamin was honorably discharged from the Navy in February 1946 and he married his beloved Victoria Lee (Petosky) later that same year. Sadly she predeceased him in 2017. Benjamin retired as the Western District Superintendent of Pennsylvania Bell Telephone after working for 40 years. In his leisure time he was one of the founders of the Bethel Park Baseball Association and served as a Commissioner. Loving father of Twin Boys (lost in childbirth), Timothy Harpster, Richard (Maryann) Harpster, Robert Harpster and David (Evelyn) Harpster. Grandfather of Isaiah Harpster. Brother of Joseph (Marilyn), William (Salle), Harvey (Sharon), the late Chuck Strott (Beverly), Harrison, Edna (George), Kate (Elvin), and Catherine (William) Brother in law of Beverley Strott, James Petosky and the late Florence Watson and Kathryn Rozenkrantz. Visitation at the O’Brien/Sullivan Funeral Home 41555 Grand River Ave. Novi 48375. 248 348 1800. Sunday 2-8pm with a Scripture service at 7:00pm In state at Holy Family Catholic Church 24505 Meadowbrook Rd. Novi. Monday 9:30 until the funeral Liturgy at 10:00am. Interment with military honors will take place at Great Lakes National Cemetery. Almighty Father, whose way is in the sea, and whose paths are in the great waters, whose command is over all and whose love never faileth: Let me be aware of Thy presence and obedient to Thy will. Keep me true to my best self, guarding me against dishonesty in purpose and in deed, and helping me so to live that I can stand unashamed and unafraid before my shipmates, my loved ones, and Thee. Protect those in whose love I live. Give me the will to do the work of a man and to accept my share of responsibilities with a strong heart and a cheerful mind. Make me considerate of those entrusted to my leadership and faithful to the duties my country has intrusted to me. Let my uniform remind me daily of the traditions of the Service of which I am a part. If I am inclined to doubt, steady my faith; if I am tempted, make me strong to resist; if I should miss the mark, give me courage to try again. Guide me with the light of truth and keep before me the life of Him by whose example and help I trust to obtain the answer to my prayer, Jesus Christ our Lord. Amen.[4]

Benjamin F. Harpster Jr. 94 February 5, 2019 Benjamin was born in New Brighton, Pennsylvania on October 24, 1924 to the late Benjamin Franklin Harpster Sr. and Grace (Hilliard). When he was 17 his father gave him permission to join the US... View Obituary & Service Information

The family of Benjamin Franklin Harpster Jr created this Life Tributes page to make it easy to share your memories.

Send flowers to the Harpster family.