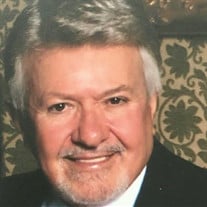 Antonio Forcellini was born in the Province of Teramo, Italy on October 23, 1943 to Filippo and Maria Forcellini. Tony immigrated through Ellis Island in 1949 and obtained citizenship at the age of 18. He was one of the proudest and most patriotic Americans one could meet. Tony’s life was defined by hard work, philanthropy, passion for the stock market and cars, and above all, love of family (which included his dogs). He often said, La famiglia e tutto (family is everything). After graduating from Girard College Preparatory school in Philadelphia, Tony moved to Michigan where he earned his BBA from Western Michigan University in 1965 and Juris Doctor from Wayne State University in 1968 (with admittance to the State Bar the same year). He proudly served as a Captain in the United States Army, stationed in England, from 1969-1971. Upon return to the States, he obtained his Master in laws of Taxation from Wayne State University and built a 45-year career at Manufacturers Bank (Comerica). Tony was an accomplished Department Head and Relationship Manager. He treated both his employees and clients as he would want his own family treated and was well respected and admired. Tony had a keen eye for business and investments. In his sparetime he built an impressive real estate business and actively monitored and traded in the stock market. In retirement, he transitioned to the role of “Grandpop Tony” and loved his Grandsons Ben and Nick (as well as his Grand dog Teddy) more than anything. Tony was predeceased by the love of his life, Geraldine, whom he was married to for 51 years. Tony and Gerry shared a zest for life and loved to travel, enjoyed Lions games, the theatre, concerts and attending events at the DAC. Most of all, they cherished their time spent with good friends, especially with their lifelong friends they lovingly referred to as the “Dinner Group”. Tony is survived by his son Anthony (Kim Cunningham), Daughter Elisa (Jason) Delozier, Grandsons Benjamin and Nicholas Delozier, his faithful canine companion Sergio, as well as his Sisters Anna (Antonio) DiGuseppi. Amelia, (William) Schenk, Alba (Thomas) DiDonato, and numerous cousins, nieces, nephews, and friends. He was predeceased by his sister Nancy (Daniel) O’Connor. Donations can be made in Tony's honor to the Tunnel to Towers Foundation or the Sons of Italy Foundation

Antonio Forcellini was born in the Province of Teramo, Italy on October 23, 1943 to Filippo and Maria Forcellini. Tony immigrated through Ellis Island in 1949 and obtained citizenship at the age of 18. He was one of the proudest and most patriotic... View Obituary & Service Information

The family of Antonio Forcellini created this Life Tributes page to make it easy to share your memories.

Antonio Forcellini was born in the Province of Teramo, Italy...

Send flowers to the Forcellini family.