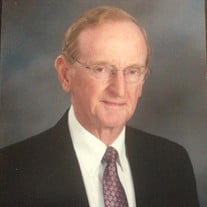 Alan Kay Henry July 29, 1932 - September 11, 2021 Beloved husband of Shirley (nee Sutcliffe) Henry for 65 years. Loving father of Carol Maise and Susan (Jeff) Jugan. Cherished grandfather of Eric (Kaitlyn) Maise, Kelly (Erich) Heise: Zachary, Nicholas (Cara), and Benjamin Jugan. Dear brother of Mark (Shirley) Henry and the late Judy Hagstrom Zalic Al grew up in Dearborn and graduated from Fordson High School in 1950. He then began studies at General Motors Institute now Kettering University. He completed five years of coop studies with Fisher Body with a degree in mechanical engineering, and continuing at Fisher Body Plant 23 until Fisher was absorbed into GMC and worked at the Warren GM Technical Center until his retirement in 2003, making numerous trips to Europe and Japan. He retired after nearly 52 years with GM and continued to make sure his friends and family drove GM vehicles. He also held a MBA from Wayne State Business School. A long time member of Littlefield Presbyterian Church Al served as an elder for several years and was active in church outreach and mission programs. He then attended and became active in similar programs at First Presbyterian Church of Northville where he played pickleball, joined the golf league and helped run the New Horizons senior group. Al found great joy in cheering on his grandchildren during numerous sporting events over many years. Even terrible weather conditions couldn't keep him away. When he wasn't at a field, court or rink he could be spotted at the local concert venue enjoying all types of music. Al didn't have much to say but when he did it was profound, meaningful and often humorous. His family will find comfort in many cherished memories. In lieu of flowers, donations can be made to Focus Hope, Gleaners or First Presbyterian Church of Northville for the outreach programs where Al volunteered. A gathering of friends and family will take place on Sunday October, 10th starting at 3:00 PM with memorial service at 4:00 PM at The First Presbyterian Church Of Northville.

The family of Alan Kay Henry created this Life Tributes page to make it easy to share your memories.

Send flowers to the Henry family.