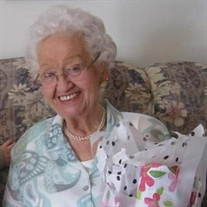 Agnes Mae Chartier was born in Detroit on April 19, 1930. Her father Frank and mother Lily both emigrated to the U.S. from Wigan, England in 1927. Agnes was a younger sister to Theresa, and the big sister to her brothers Vincent and Frank. They grew up together in their family home on Nevada Street in Highland Park and attended church services and school at St. Benedict’s Catholic Church in Highland Park, Michigan. Agnes told of her early memories playing with her long-haired Dachshund named Zip and her hours spent with her sister roller skating in front of their home. She loved playing with dolls and was always the little mama who held a special place in her heart for her little brothers. The first job Agnes held was working the soda fountain at S. S. Kresge drug store where she was paid 33 1/3 cents per hour. While she was raising her children, she worked part time as a bookkeeper for Kmart and later for a furniture company and the Fabulous Star Bakery. After her six children had grown, she started working at Henry Ford Mansion as the house keeper for the Chancellor of the University of Michigan. Agnes retired after fifteen years of loyal service. As a young woman, Agnes met Elmer through mutual best friends. She and her girlfriend hot-wired Elmer’s car while the boys were at church and took it for a joyride. Elmer thought she was a beauty and he spoke of a blond curl coming from under her headscarf. He was smitten. Elmer came from a big family. He was the eldest of 12 children. Agnes was amazed the first time she sat down for dinner at his house. She was used to eating a simple British meal of little meat and a few green peas. Elmer’s mother, Loretta, fed the masses with bread she baked fresh daily, huge portions of roast meat and vegetables, followed by dessert of fruit his father, Louis, would have brought home by the bushel to be canned by Loretta in her ‘spare time’. Agnes was in awe of her mother in law and loved her dearly. Agnes and Elmer were married in 1950 and over the next eighteen years they would have six children together; Terence Michael (Pamela), Kevin James (Debby), Timothy Patrick (Margaret), Brian Keith (Karen), Christopher Jude (Karen), and Brooke Terese (James), her long awaited daughter. The family lived in Detroit, MI., Tecumseh, Canada, Redford Twp. MI, and Wixom, MI. Together as a family they enjoyed their free time fishing, boating, camping and rock hunting on the shores of Lake Michigan. The Chartier family of six quickly grew adding 14 grandchildren, and four beloved step grandsons. Agnes also had 14 great grandchildren and seven bonus great grandchildren and two great great-grandchildren. Agi was wonderfully creative, enjoying painting and drawing amongst other hobbies. Whatever she set her mind to, she accomplished. She loved tea parties and took special delight in visiting various tea rooms with her grandchildren. Agnes had a heart for Jesus and never missed an opportunity to tell people that Agnes means Lamb of God. There is one word that comes up over and over when people speak of Agnes, and that is sweet. “My sweet Auntie”, “my sweet friend”, “Your mom is so sweet”. Such a lovely way to have lived and to be remembered. She was dearly loved and already greatly missed.

Agnes Mae Chartier was born in Detroit on April 19, 1930. Her father Frank and mother Lily both emigrated to the U.S. from Wigan, England in 1927. Agnes was a younger sister to Theresa, and the big sister to her brothers Vincent and Frank. They... View Obituary & Service Information

The family of Agnes Mae Chartier created this Life Tributes page to make it easy to share your memories.

Send flowers to the Chartier family.